August 31, 2015 · by patriciaacox · in About Writing, American West History, Living in the Past, National Historic Landmark, South Dakota · 4 Comments

I read Pete Dexter’s novel a few years ago (after hearing him speak at the Tucson Festival of Books where he told a fascinating story about his lawsuit against HBO). I am not a scholar of South Dakota history—most of my knowledge of Deadwood comes from accidental exposure through random reading, television shows and movies, Dexter’s book and the HBO series. Of course, everyone knows Deadwood is where Wild Bill Hickock was killed, and many other colorful characters (Calamity Jane) hung out in the 1870s.

A friend and I drove to Deadwood from Rapid City on a summer evening this past July. Winding roads head uphill (4,500 feet above sea level), through thick forests of evergreen trees. Blooming groundcover with masses of purple flowers drapes the boulders that slope upward from the road. It’s not a long drive to reach the town that began illegally in the 1870s on land which, by an 1868 treaty, belonged to the Sioux Indians. Or so they thought, until gold was discovered in the Black Hills. 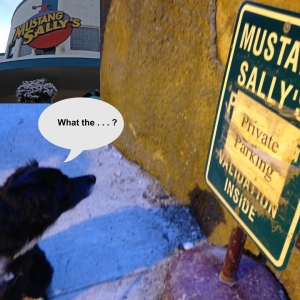 Mustang Sally was pleased and flattered to find a restaurant named after her!

We reach civilization and veer right toward the historic main street. Pull into the first parking garage we come to, and wander out to take in the sights. My dog happily   discovers the first restaurant we see is named after her, Mustang Sally’s.

Souvenir shops, restaurants, and casinos line the street. The wildest part of “wild west” these days seems to be the recreated Saloon No. 10 (not at the original location) which allows dogs. Even in the restaurant. As much as I want to support this dog-friendly venue, the music is so loud I fear permanent damage to Mustang Sally’s ears so we leave. But not before the bouncer points out the “death chair” in which Wild Bill succumbed to Jack McCall’s cowardly ambush. The bouncer assures us the chair, suspended in a glass display case above door, is the real deal. It could be. Wild Bill was already a celebrity in 1876, and the enterprising folks of Deadwood probably saw the value of preserving an artifact of that sort. 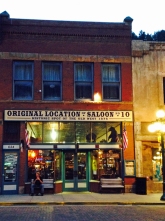 The recreated Saloon No. 10 that claims to display the chair in which Wild Bill Hickock was murdered and the actual poker hand of Aces and eights. 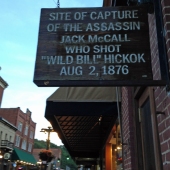 Since the town burned down several times in the late 19th century, there are not many original buildings (none of the first ones, built of timber, survived; some built of brick in later decades remain). There are “original locations” as one sign proclaimed regarding Saloon No. 10 (across the street and south of the current Saloon No. 10). 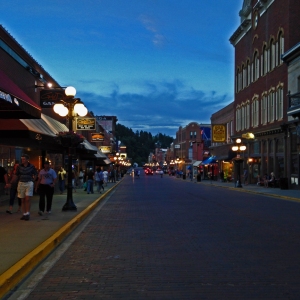 Deadwood at dusk. Why do these old western towns always seem more authentic at night?

No offense to South Dakota fans (or Deadwood fans), but the place made me a little homesick for Tombstone. Besides the lack of original buildings, Deadwood’s main street allows vehicles to drive through. There are traffic signs, parking garages, red lights. It’s a bustling, commercial enterprise directed at tourists looking for a good time, not necessarily history buffs. This would not dismay those original inhabitants, surely not Al Swearengen, owner of the Gem Saloon, which raked in thousands of dollars a night through gambling and prostitution. The prostitution is gone but the gambling came back in the 1980s, with proceeds going to historical preservation.

The entire town is a registered national Historic Landmark, and as the sun goes down and the lights turn up, it was not hard to imagine Swearengen (as portrayed by English actor Ian McShane) standing on a second-floor balcony observing the activities below. However, his Gem Theater burned down several times; after the last time in the 1890s Swearengen reportedly was broke and left for Colorado where he was murdered in a Denver street.. 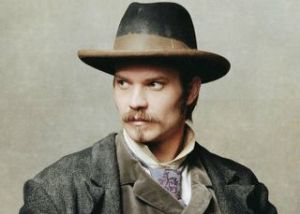 Sheriff Seth Bullock as portrayed by Timothy Olyphant in the HBO series Deadwood.

The Bullock hotel, however, built by Sheriff Seth Bullock and his partner Sol Starr in 1895, stands. In its original location, the actual original building. After a stint as a hardware store, new owners in the 1990s renovated it to its original state and it’s now a hotel again, haunted by its former owner. Next time I’ll stay at the Bullock Hotel and hope for a visitation from the sheriff. I shall also hope he resembles Timothy Olyphant.

Note: Speaking of Al Swearengen, who could ever forget the kidney stone segments on HBO’s Deadwood (google it on YouTube if you have a strong stomach and don’t mind profanity). Tune in here next week for a quick look at some other horrendous 19th century medical “treatments”.