I have a confession to make. The first time I ever climbed up onto the back of a horse was at the ripe old age of 37.

I remember well the day I stood waiting with a friend of mine for the current trail ride to return so we could have our turn. On this crisp autumn day, tree branches left gaps between multi-colored leaves through which a crystal blue sky appeared. Wood smoke from the rustic cabin that served as the stable’s headquarters scented the cool air. Behind us horses still in the corral slurped water from troughs and the smell of hay wafted from beneath their hooves.

While I tried to keep my hands from shaking, I wondered why I had let my friend talk me into this activity which seemed to have a high potential for disaster. 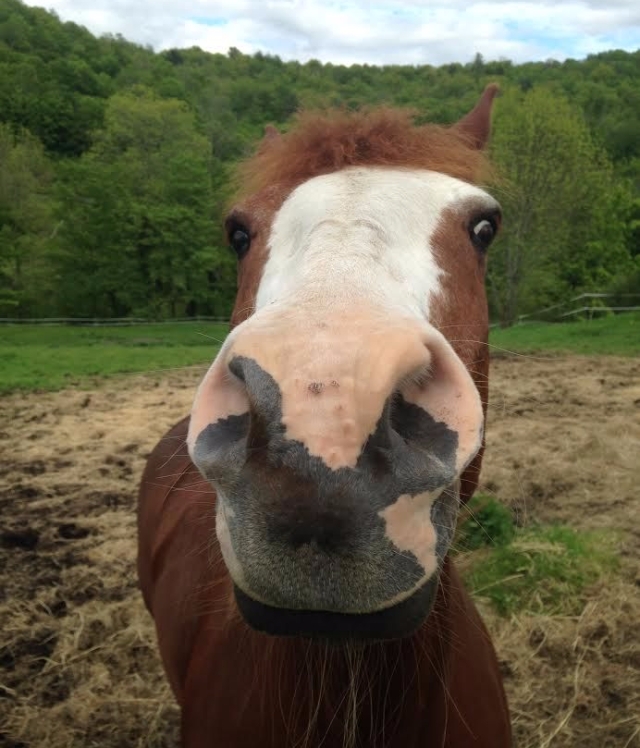 Horses look bigger in person than on television screens.

Horses don’t look that big on television or even on a movie screen. In person, it’s a different story. I crawled up onto mine and noticed the ground seemed far, far away and very rocky. Of course, being good trail horses they knew the ropes. With my fantasy intact that a horse somehow knew which way to go and all I had to do was stay on it, I squeezed my legs into that horse’s flanks as tight as I could. I had no idea why the poor horse kept breaking into a trot, which added to my agitation.  The horse ignored my yanking on the reins and returned to a walk only when he ran into the horse in front of us.

Just as I began to calm down and enjoy riding along a leaf-covered dirt trail lined with trees in bright, fall foliage, we came upon a curve from which we could not see the beginning of the line. And then I heard a sound that struck terror into my heart. Hoof beats! Galloping hoof beats! The horses were breaking into a run! With only a few seconds of warning, I managed to wrap one hand under the front of the saddle and grab the horn with the other. Leaning forward, I braced. And we ran. Again, that poor horse. Because I didn’t know “keeping your seat” was even a thing. I bounced along, banging up and down, hanging on for dear life. Somehow I managed to stay in the saddle for the perhaps two minutes until things calmed down and we returned to a nice, slow, safe walk. My exhausted thighs and calves gave respite to the squashed horse, and we walked nicely to the end of the ride.

I slid to the ground, still shaking but hooked.

I spent the next year taking Western Riding lessons at a local horse facility’s  indoor arena. Fortunately, a thick layer of soft sawdust covered the ground. I landed on it a few times, once requiring a trip to the ER, but I got right back on that horse. I learned how to curry brush, pick hooves, put a bridle and saddle on that big animal, and how to ride. I learned how to keep my seat at a lope. As my fear diminished I wanted to go faster!

But we never went outside the arena. 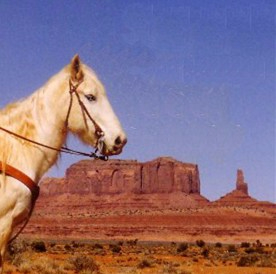 The horse I rode on my first visit to Monument Valley Tribal Park in 1988.

Then an opportunity arose to take my dream vacation in Arizona. Monument Valley was one of the last stops on my itinerary. I headed for the horse concession. My first chance to ride a horse outside of an arena and it happened to be the most awesome place on earth, a tribal park on the Navajo Reservation. The horses looked shorter than the one I’d been riding, and now I know they also looked like wild mustangs. Mine was a shaggy white guy with a blunt face and a nice personality. I hopped on, first in line behind the Navajo guide, followed by a string of about six other tourists. Halfway through the ride, we broke into a run. We ran fast and we ran far. Through washes, past boulders and stunted piñon trees, up and down hills. One hand full of reins, the other resting calmly on my thigh, I kept my seat. Me! A little city girl. Riding “hell bent for leather” behind an American Indian through the red sandstone monoliths of Dineh-tah. We left those other riders in our dust!

I’ve learned many times in the thirty years since to not run away just because something is scary! Every single thing that has intimidated me always ended up being worth pushing through. All of this scared me half to death: riding a horse, moving across the country by myself (I moved to Arizona two years after that wild ride), hiking in the desert, finding new jobs, putting my writing out where others could see it.

And once I did them, every one turned out to be an amazing experience.

Are you afraid of trying something new? Do it. Do it scared.

For more information on Patricia Grady Cox, please visit my webpage. Thanks!

Tell me what scares you. Did you overcome it? How? If not, what would help you do so?