Arizona owes its existence to mining. First gold, then silver, then copper. Eventually these mines played out or flooded out and closed down. Tombstone started out as a mining town and was too tough to die. But other mining-associated towns, such as Bisbee and Jerome, became ghost towns before revitalization as artists’ communities or tourist destinations.

This is a photo of Charles Stanton standing in front of his store in the town he named after himself. Photo by unknown photographer, public domain.

The town of Stanton, way off the beaten path between Wickenburg and Yarnell, died and stayed dead. Dead for about a hundred years before it became the home base of prospectors once again searching for gold. I stumbled across Stanton about twenty years ago on my way to Prescott via State Route 89.

Now, keep in mind this was over twenty years ago. I think most of this is a true story but memories can be fickle. This is how I remember it.

I saw a sign for Stanton and turned onto a dirt road. After about ten or fifteen miles, I came upon another sign at a gate that said I was entering private property, owned by the Lost Dutchman Mining Association. An old codger welcomed me to come in and look around. The remnants of the original town of Stanton, enclosed by a high chain-link fence, had morphed into an RV park for modern-day prospectors. The current residents lived in recreational vehicles and trailers, but there were original buildings still standing.

The codger told me stories about a nearby area called Rich Hill. He said that at one time gold nuggets as big as baseballs sat right out on the ground; anybody could just pick them up. When the easy pickings were gone, the serious mining began. Those excavated tunnels, abandoned, became the home of hundreds of rattlesnakes who found the steady climate to their liking. 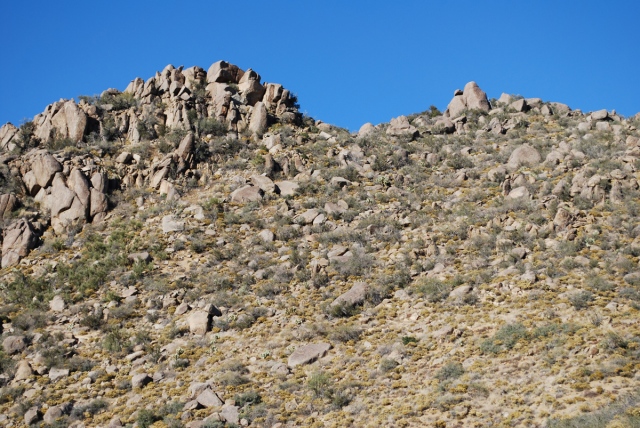 This is the terraine surrounding Stanton. Can you picture four outlaws and their captive picking their way up this mountainside? Photo by Patricia Grady Cox

A high boardwalk accessed via stairs stood several feet off the ground. It fronted the deteriorating shacks that had once been the town, built high on a slope because seasonal rains caused nearby Antelope Creek to flood. One of the remaining buildings, the Opera House, housed a long, narrow hall that culminated in a raised stage. The brick wall at the back was pock-marked. A few holes went completely through the wall. Maybe it was erosion, a century of wear and tear. But in my mind I saw a hall full of grizzled miners and a musician on stage. A bad musician. The audience didn’t boo or hiss or throw vegetables. They just raised their pistols and put an end to the performance. Nope, not erosion. Bullet holes.

The town of Stanton started off as a stage stop, then in the 1870s Charles Stanton decided to take over and named the town after himself. He then proceeded to kill off his competitors, either by tricking them into killing each other, getting them shipped off to the Yuma prison, or hiring bandits to do his dirty work. Historical accounts attribute the massacre of at least one family to him. He met frontier justice, however, when an angry resident murdered him in the 1880s.

You’ve reached the top of those mountains north of Stanton and you stop to look south, toward Wickenburg. Can you see the distinctive domed mountain, mid-picture? Home of the Vulture Mine. Photo by Patricia Grady Cox

In my novel HELLGATE (due out in April from Five Star Publishing), a character inspired by Charles Stanton runs an outlaw hide-away up in the hills near Prescott. Like Mr. Stanton, Mad Mason McCabe is a ruthless old west “Godfather,” with minions doing his bidding. And on their way to Hellgate my outlaw gang, with their captive young woman, spend a night in Stanton. Yes, performing and shooting ensues.

And there be snakes.

You can read all about it on April 18. Preordering of HELLGATE is available here.

Learn more about me and my writing here.